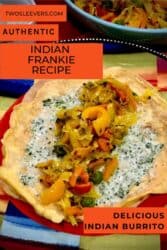 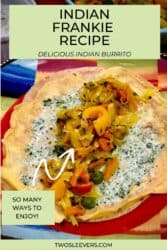 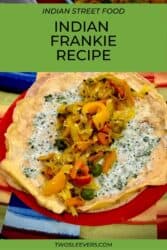 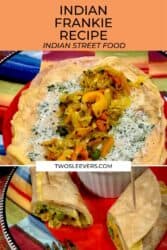 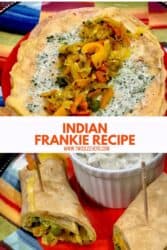 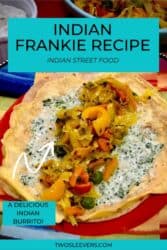 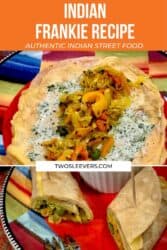 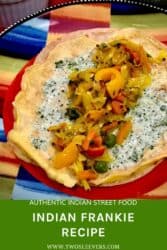 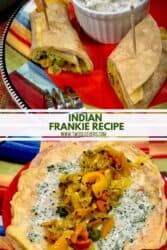 If you've never heard of a Frankie before, you're missing out. It is Indian food in minutes! A savory, spicy "Indian Burrito", Frankies are great for using up leftovers. A great no-mess way to make Indian Breakfast Burritos that kids will love.

What is a Frankie?

At its essence, a Frankie is a roti or chappati, with a layer of egg inside, smeared with a sauce or chutney, and then filled with whatever leftovers you have around. It is then lovingly rolled up into a piece of foil to contain it, handed to you, and you are sent off on your way, tucking into a wholesome snack as you walk around the streets of Mumbai--on in my case, the streets of Keller, Texas.

I often make my little Indian Burrito with Tortillas which are easier to find. This also allows me to make breakfast tacos that don't spill right out of the tortillas when I get distracted by a shiny object and stop focusing on my food.

What is the difference between a Frankie and a Kathi Roll?

Let me present an unpopular opinion--there is zero difference to someone who is eating them.

Sure, purists can point to the fact that Frankies were originated in Mumbai, and Kathi Rolls started in Kolkatta. There will be great discourse on the fact that one has cutlets (maybe?) one has pieces of meat (sometimes?)--but all of this is arbitrary and easily overridden.

When you're sitting in your kitchen, tucking into one of these delightful Frankies, you will absolutely not care.

Why You Will Fall in Love With This Frankie Recipe

How To Make This Indian Frankie Recipe

Below is a list of mix and match recipe ideas. This will allow you to make a low carb Frankie, a vegan Kathi roll, or a veg Frankie Recipe.

Choose one bread, one sauce--unless your dish was saucy (like me) and then you can omit--one filling, and maybe a few extras. Cook, roll, eat. Repeat.

So what's up with the 33,048 Variations you ask? Well, if you take one bread, one sauce, one filling, and one garnish from the lists below?

I will be the first one to tell you that Naan + Chicken Salad + Ketchup + Avocado is NOT a good one but you know, you do you.

Halp! Too Many Options!

I get it. Where do you start? So I put together a few classics for you.

Are there really NO RULES for How to Make A Frankie??

Just one. For the love of all that is sacred, do not put rice in your Frankie!

I don't know why this is true because really Indians think nothing of making a potato curry and eating it with rice or chappatis. But for some reason, we absolutely never combine rice and chappati!

Actually you know what? You want to combine them? You go right ahead. As long as everyone enjoys them, who cares?

Just... don't do that in an Indian restaurant. Because yes, when you make a burrito at your local Indian buffet and put rice inside your naan, most of us are almost certainly judging you 🙂

So I hope you found this post for how to make Frankies, a popular Indian Street food--a.k.a, how to repurpose leftovers with flair--helpful for you.

Leave me a comment to let me know your favorite Frankie Recipe combinations! 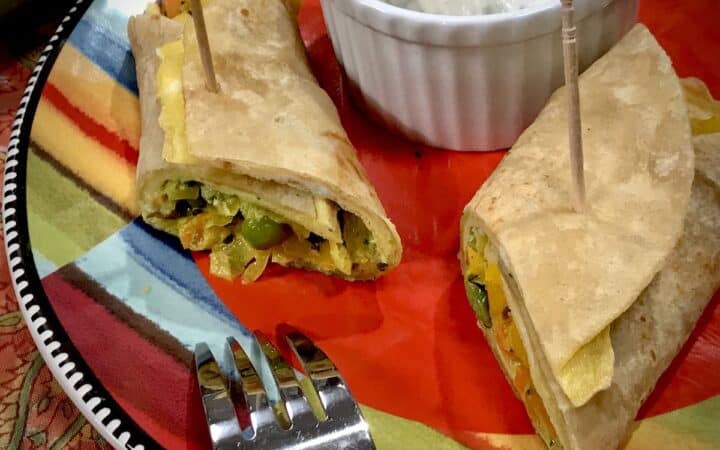 Please see the post for the very many umpteen options for breads, sauces, and fillings.