One step, one Pot, less than 5 ingredients, and you've got an authentic tasting Hainanese Chicken Rice Instant Pot recipe that your whole family will love.

What Makes This Hainan Chicken So Good?

What Is Hainanese Chicken Rice?

Hainanese Chicken Rice is a rice and chicken dish that is very popular in Singapore, Malaysia, and Thailand. It is called Khao Man Gai in Thailand. It is based on Wenchang Chicken, a popular Chinese dish that has been adopted in various regions of Asia.

How Do You Make Traditional Hainanese Chicken?

I just want to say, I do know how to make this dish properly I just don't want to spend hours making it. I wanted it for dinner and if you want proper Hainanese chicken for dinner you better start early.

Of course, that's not how I did it. But I promise you'll be just as satisfied with this version.

So, of course, I cooked the chicken and the rice in one pot and I used a mix that contains ginger and fat. No really, I use a mix for this. You guys know I never use pre-made mixes, but I do use this Asian Gourmet Hainanese Chicken Rice Mix because it is AWESOME and effortless.

This is a super family-friendly dish that's hard to get wrong if you make it my "lazy person" way.

What Kind Of Chicken Should You Use?

I typically use skinless chicken breast, but if you use chicken with the skin still on it, it renders more fat. More fat equals more flavor for the rice.

If you prefer to use chicken thighs, I've tried it this way too. It's just as delicious.

Traditionally this Hainan Chicken recipe is served with a super flavorful and delicious dipping sauce. But I was in a hurry when I created this recipe and it was good without it. If you have a few extra minutes and want to take the dish up a notch, try making this dipping sauce. You'll need:

You'll want to mix this together and serve on the side to drizzle over the Hainan Chicken.

If your family loves this recipe for Hainanese Chicken Rice as much as my family does, make sure you share it with your friends on Facebook and Pinterest so you can make it again soon. 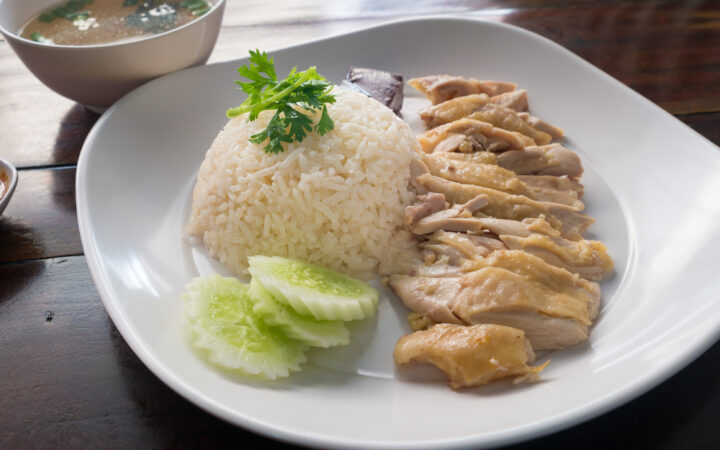 Nutritional info doesn't include the Asian Gourmet Package mix or the dipping sauce.