×
You are here: Home / All Recipes / Vegetarian / How to Cook Barley | Foolproof Directions for Instant Pot, Stovetop, & Rice Cooker 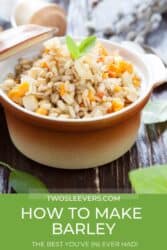 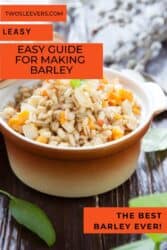 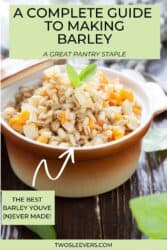 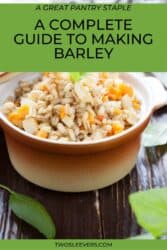 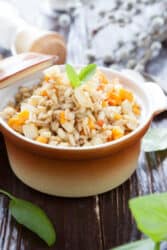 Learn how to cook barley perfectly, in your pressure cooker, on the stovetop, or in your rice cooker. Perfect fluffy, tender, chewy morsels of barley will keep you coming back for more. You can also find a variety of Instant Pot Barley Recipes to try.

If you've never cooked with Barley before, you are in for a treat. Chewy, filling, nutritious, cheap, tasty--I could go on about the benefits of barley. But before you start cooking, you may have a few questions about how to cook barley, that I want to answer for you.

What is the Difference between Hulled Barley and Pearled Barley?

Let me tell you the biggest difference. You want Pearled barley 🙂 I know not everyone will agree with me on this. But Hulled barley takes FOREVER to cook, and is so much chewier that it's not always well-loved.

But my opinions aside, this is what you need to know.

Hulled barley, or barley groats, are whole grain barley. Only the very outer hull has been removed. So they're more
"whole grain" if you will. In that sense, it could be considered more nutritious. It certainly has a little more fiber. But it is also a lot chewier than pearled barley. The biggest issue for me, however, is that takes a long time to cook. On the stovetop, it can take 60-90 minutes to cook hulled barley.

Pearled barley is the more common form of barley. When a recipe doesn't specify the type of barley, it's usually pearl barley they are referring to. In this case, the outer husk and the bran on the groats have been removed. The resultant barley, while still chewy and nutritious, is a lot faster to cook.

In addition to those types, you may also encounter Scotch Barley, Barley Flour or Barley Meal, or even Barley Flakes.

Or you know, you could be like most people who have never in their lives encountered Barley. If you're one of those, we are going to fix that!

Can I substitute hulled barely for pearled barley or vice versa?

Can you? Yes absolutely.

Will the recipe work as written? Probably not.

You will need to adjust both, the amount of water, as well as the cooking time if you intend to substitute one for the other.

If this is your first time cooking barley, or you aren't a great improviser or experienced barley chef (is there such a thing?), you might want to stick to the recipe.

Why Cook with Barley?

How to cook Perfect Stovetop Barley

How to cook Barley in a Rice Cooker

Do you have to soak Barley before cooking?

You do not have to soak pearled barley before cooking. You also do not need to precook barley before adding it to soup, unless whatever else is in your soup will be mush before the barley finishes cooking.

What Can I Make With Barley?