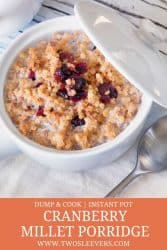 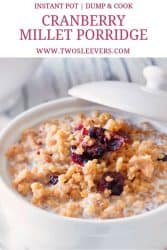 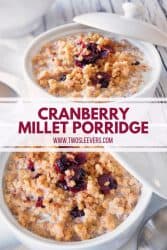 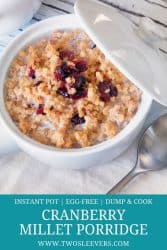 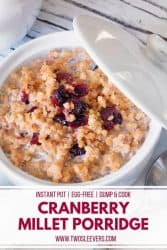 Warm your soul with this deliciously spiced Instant Pot Cranberry Millet Porridge. It's a simple recipe that's a perfect way to make millet porridge without all the fuss and babysitting for traditional millet porridge recipes.

What is millet porridge?

Millet porridge is a hot, creamy cereal made from millet grains. Many people will say that millet grains taste like a nutty quinoa with the texture of couscous. Realistically, it's going to taste mostly like whatever you've cooked it with, kind of like oatmeal.

In the United States, millet is indeed largely associated with birdseed. Which is a pity because it's actually great for humans too. In large parts of the world, including Africa, Asia, and Eastern Europe, people eat millet as a normal part of their diet.

In Hindi, it's referred to as Bajra and Bajra Roti is a very popular, rustic flatbread. It's often considered farmer's food. I like to slather my bajra roti with lots of ghee. Without that, I tend to find it a bit dry and chewy. But I mean, ghee always makes everything better so there's that!

In addition to using it for flatbreads and porridges, it is also used to brew beer and other fermented beverages. Unfortunately for us, I have no idea (yet!) how this is done 🙂 So for now, we will have to content ourselves with this vegetarian millet porridge instead.

Indeed it is. In fact, it's often used in many gluten-free baking mixes and flours, so you've likely had it without even realizing it.

Millet takes on the flavor of whatever it is cooked with, making it a great ingredient to cook with. It is also very filling.

I find it be chewy and a little sweet. If you've ever eaten farro, it's a lot like that. (If you haven't eaten farro, you should remedy that with this Instant Pot Farro Risotto recipe.) It is close to brown rice in terms of chew. It has a slightly nutty texture.

It's very versatile. It can be made into flour. You could toast it to enhance the nutty flavor. You could overcook it and mash it like potatoes, etc. Or you could do what I did for this millet porridge, which is cooking it until it has a little chew and isn't entirely soft.

Where Can I Buy Millet?

Here is where I got my . But you can also get them in many health food stores.

I would suggest you do not buy birdseed for this recipe 🙂 I am not sure how well cleaned that stuff is. Better to be safe.

Let's talk about how this tastes. If you like the fruity tang of cranberries, and the spicy warmth of cinnamon, you're going to love this Cranberry Millet Porridge. The heavy whipping cream makes this so creamy and perfect for a chilly morning breakfast.

It is also incredibly easy to make in the Instant Pot. Usually, millet porridge has to be cooked on the stovetop or in the oven, with several different steps. This Cranberry Millet Porridge is basically a dump and cook recipe making it much simpler.

Is millet porridge good for breakfast?

It's more than good for breakfast, it's great for breakfast! Millet is incredibly nutrient-dense. It's heavy on protein and fiber, and high in Vitamin-B making it the perfect way to start your day.

How do you make Instant Pot Cranberry Millet Porridge?

Want some more breakfast recipes for your Instant Pot?

Do yourself a favor, and make this Cranberry Millet Porridge sometime soon. It's tangy and delicious and has all the right flavors to make your morning meal delightful! I can't wait for you to try it and tell me what you think. 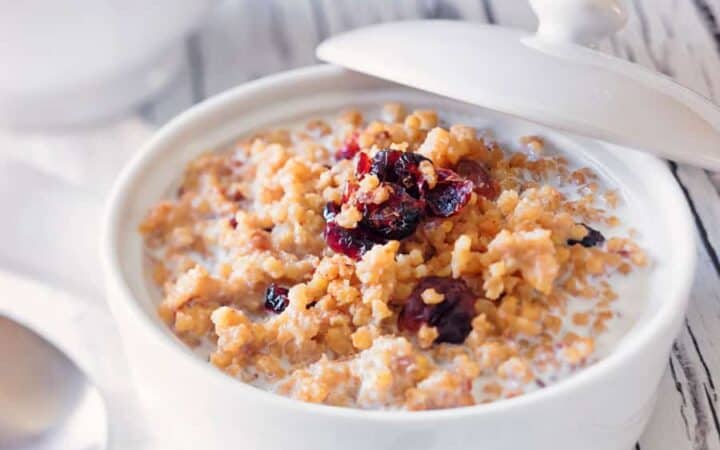