×
You are here: Home / All Recipes / Low Carb Recipes / Keto Ham and Bean Soup
Jump to Recipe - Jump to Video - 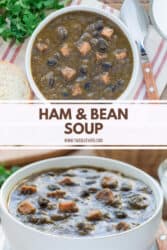 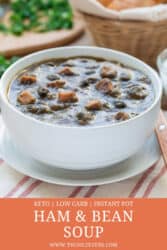 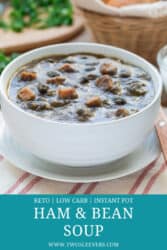 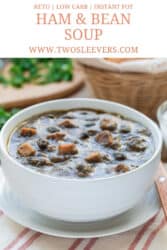 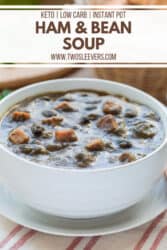 This Keto Ham and Bean Soup recipe uses a secret, keto bean substitute that tastes just like the real thing! Don't believe me? Trust me, you'll definitely want to give this delicious soup a try if you're a fan of ham and bean soup and are on a low carb diet.

What Makes This Instant Pot Ham And Bean Soup So Good

Yes, low carb beans! A feasible keto bean substitute! One of my readers Sharon asked me a while ago to make a dish with low carb beans. An oxymoron if you've ever heard one, right?

Sharon told me about black soybeans and said they were relatively low in carbs. So I looked them up and lo and behold, she was right! They are much lower in carbs than any other beans.

So I decided to buy a bag of dried black soybeans from Amazon and give them a try. This was weeks ago. I really wasn't sure about those beans.

How would they taste? How long to cook them? Would it even work? I just really wasn't sure.

I decided to take my own advice and cook the dried black soybeans just as I would any other whole bean. I decided to add a ham bone and some leftover ham, but you can also add smoked ham hocks if you prefer.

Here's a visual of all the ingredients you need for this low carb ham and bean soup.

Once you gather them together, it's merely dumping and cooking using the BEAN setting on your Instant Pot or Pressure Cooker. Now let's get to cooking...

Watch A Video On How To Make Keto Ham And Bean Soup!

How To Make Instant Pot Ham And Bean Soup

1. Put everything into your Instant Pot or Pressure Cooker.

2. Cook using the BEAN/CHILI setting if you have one, or set at high pressure for 30 minutes. Allow it to release pressure naturally for 10 minutes, and then release all remaining pressure.

3. Remove the ham bone, allow it to cool, shred all the meat and put it back into the soup.

4. Using an immersion blender, roughly purée a little of the soup.

5. Serve hot with some hot sauce on the side.

As to how the black soybeans taste? I have to say they taste beautifully creamy and quite nondescript. I think when you eat this Keto Ham and Bean Soup, it will taste to you like every other Ham and Bean Soup you've had--well, maybe better because of all the seasonings I used! 😀

But I doubt this keto bean substitute will taste off-putting at all. I quite loved them, as did my husband Roger and my son Alex. And I'm sure you'll love this soup as well!

There seems to be a lot of debate on what makes an ingredient keto or not. There are a lot of myths out there about what makes something keto, and it's important to remember that ketosis is a physiological state that is reached by keeping one's carb count low and increasing one's healthy fat intake.

With that being said, keto-friendly foods simply help you get into ketosis. However, as long as you stay below your allowed carb intake for the day, you can reach ketosis whether you eat those carbs throughout the day or eat them all in a single meal (I cover this concept in more depth in my Keto Fat Bombs, Sweets & Treats book). You can avoid soy altogether if you'd like, but don't go writing to me to tell me that it's not keto 😉

As for the carb content of black soybeans, a cup of prepared black soybeans has 16 total carbs with 14 of those being dietary fiber, for a total of 2 net carbs per cup.

For more info on how to cook beans and lentils in your pressure cooker, check out my guide on How to Cook Beans in the Instant Pot!

With this delicious keto bean substitute, you can enjoy a deliciously Instant Pot Ham and Bean Soup guilt-free and on a low carb diet! Make sure to share this recipe with your friends on Pinterest and Facebook so they can enjoy it as well! 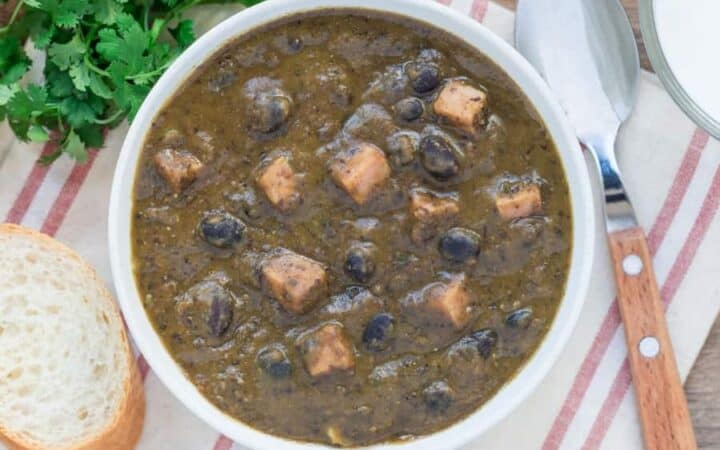