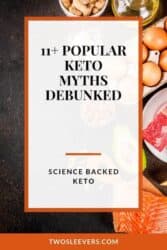 There are so many myths and half-truths surrounding the keto diet so I would like to debunk and discuss the most popular ones.

While I'm all for people getting their Celebrity Gossip from the internet, I really worry when people read one media article to determine what's good for them.

As a trained scientist, I spent years conducting literature reviews and published many articles in peer-reviewed journals. I try to bring that same rigor and scrutiny to the articles I write on Keto.

I am not a physician. My doctorate is in Experimental Psychology. As such, I am a Research Scientist and rely on literature reviews of articles published in peer-reviewed journals to arrive at my conclusions. Please consult with your doctor to determine what is right for YOU.

The Most Common Keto Myths and the Truth Around Them

Don't let an article or two you've read in a magazine or on the internet influence how you feel about the Keto diet before you do all of your research. Here are the 11 most common Keto myths and the truth behind them.

Myth #1: The Keto Diet is too difficult

Before I began the keto diet, I tried literally every diet in the world, including restricting my calories down to 800 per day and nothing worked. After 10 years of diet fails and gastric sleeve surgery, I finally accepted that I would have to eat a low-carb keto diet. Besides losing 80 pounds, I've maintained my weight loss and continued to enjoy a keto lifestyle. I'm able to not only cook delicious keto food at home, but I can find delicious keto options almost anywhere I go in the world. Additionally, my rheumatoid arthritis has significantly improved, as has my overall health. If I can adapt and maintain a keto lifestyle anyone can. Beyond my experience, A survey in Journal of Insulin Resistance recently found that before respondents started their low-carb diets, nearly nine of 10 experienced intense hunger between meals. Once on the diet, only 3.5% said they grew hungry between meals. So the biggest impediment to diet success — hunger between meals — is virtually eliminated on this high fat, low carb lifestyle

Myth # 2:  The Keto Diet Is Only For Weight Loss

The benefits of the ketogenic diet extend far beyond weight loss – they also include regulating hormone production, helping to normalize blood sugar, improving cognitive functioning, improving digestive health, and potentially even reducing the risk for certain diseases and disorders like diabetes or heart disease.

I acknowledge that these two diets may be somewhat different — but only with respect to whether or not they specify a per-day carb cap.

The keto diet generally requires that you stay at or below 20 grams of net carbs per day while low-carb diets simply exhort you to eat fewer carbs. Often the standard American diet (SAD) is used as a yardstick, and the average consumption of carbs is about 300 grams daily for most Americans.

As you can see, there's a lot of room between 300 and 20 to specify what constitutes low-carb. Both keto and non-specific, low-carb diets typically emphasize consuming lower amounts of carbohydrates, similar amounts of proteins, and higher quantities of fat than are consumed in the SAD.

Myth #4:  Intermittent Fasting Must Occur On A Keto Diet

Intermittent fasting is encouraged during the keto diet and may help accelerate results (such as detoxification and weight loss), but it's not a requirement to achieve or maintain ketosis.

Many people find IMF to be easier when following the keto diet because ketosis is known to kill cravings and reduce your appetite.

Myth #5:  The Keto Diet Makes You Feel Tired And Sluggish

What the naysayers are referring to here is the Keto Flu. When you start the keto diet you might experience fatigue, headaches, and muscle aches.

However, these symptoms are actually a sign that the diet is working, and the body is switching from burning glucose as fuel to burning fat.

This is a profound shift for the human body that can have uncomfortable symptoms but usually, last only 3-4 weeks.

Myth #6:  The Keto Diet will raise your cholesterol

The keto diet is not the Atkins diet and you will not be eating platefuls of bacon at every meal. While the majority of your diet will come from fat (60-75%) most people on keto choose to get their fat from a variety of animal and plant-based fats, so foods like avocados, nuts and healthy oils such as olive are usually in abundance.

Many studies have also found that low-carbohydrate dieters had lower cholesterol than low-fat dieters after one year.

One thing to note is that a ketogenic diet does often elevate LDL cholesterol. However, LDL-C, when influenced by diet, has never been shown to have any effect on cardiovascular risk.

Myth #7:  Keto Is Dangerous For Diabetics

The ketogenic diet is actually the most promising diet for people with Type 2 diabetes. The nutritional remedy for T2 diabetes is carbohydrate restriction in order to manage blood sugar or glycemic levels.

In a large, ongoing university-based study, 60% of patients with Type 2 diabetes reversed their diagnosis of diabetes after just one year on a ketogenic diet, and 94% of participants reduced or eliminated their need for insulin medications while improving the vast majority of cardiovascular risk factors.

Sadly, calories do still matter for the most part on a keto diet. This is particularly for women. It is simply not possible to lose weight while eating many more calories than your body can burn.

You may be able to eat more calories on a keto diet than you could on a high carb diet, but there will still be a ceiling for weight loss.

There is some debate as to whether it's excessive calories or excessive fat that matters. The fact is, that when following a ketogenic diet, excess calories usually come in the form of excess fat, since fat makes up 75% of your diet anyway. So it ends up being one and the same in practice, if not in physiology.

Lean people are leptin sensitive, and can eat more fat and still stay lean. Obese people are leptin insensitive. As we eat more, our metabolism doesn't ramp up, it doesn't burn those excess calories/fat as easily. Then we get fat.

Meanwhile, our lean cousins are stuffing their faces, having their metabolism ramp up, and still staying thin.

Hey, I never said it was fair! It just is. So we deal.

Myth #9:  Eating Keto Means I Have To Eat All The Fat Grams My Calculator Specifies

Most experts agree that we should eat only as much fat as is needed for satiety. Especially if you're trying to lose weight. Your goal in keto is to get your body to burn stored fat. This is much harder than burning the fat you eat because your highly efficient body is going to burn the fat you eat for fuel before it starts tapping into your stored reserves.

If you consistently eat more fat than your body needs to burn for fuel, not only will you not lose fat, but you could gain some fat. The main reason fat makes up such a high proportion of keto diets is because it does not raise insulin.

If you're hungry, fat not only satiates quickly, but it does so without raising insulin secretion.

Higher levels of ketones do not cause greater fat loss. Being in ketosis is much more important than the level of ketosis. As long as you're in ketosis, you are burning fat.

These foods are known to spike blood sugar and insulin levels for absolutely everyone. I advocate not eating sugar, not even in small quantities. Sugar causes a spike in insulin and often results in cravings for more sugar.

Other than that however, what matters is total carbohydrate load. For example, if all you ate all day was an apple, you'd likely still be in ketosis. In this situation, an apple is "allowed". So it all comes down to not one single ingredient, but your overall intake that day.

Now you may CHOOSE to avoid certain ingredients like corn, or carrots. But realize this is a guideline and a choice, not an absolute for what's needed to be in a ketogenic state.

I eat real food and watch macros carefully. So yes, my Almond-Carrot Cake includes carrots and I might put two low-carb corn tortillas in a pot of Chicken Tortilla Soup.

I selectively use tomatoes in my recipes and will have small amounts of raspberries and strawberries if I'm craving something sweet.

What matters to me is that the overall carb count remains low and my lifestyle is sustainable.

Read this post on What to Eat On Keto To Get Started if you're brand new to Keto and need to know the basics. It will help you understand Keto and the basics of the diet.

As you can see, I've only touched on some of the most popular keto myths here. Let me know if you've heard others in the comments.