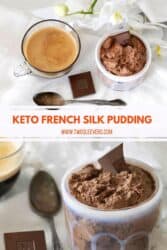 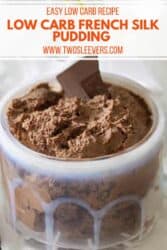 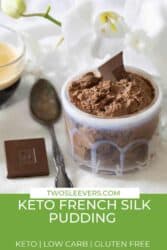 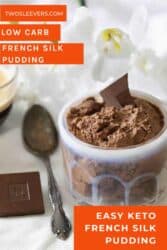 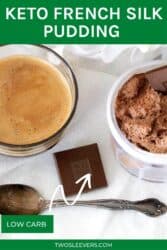 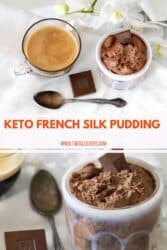 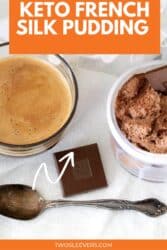 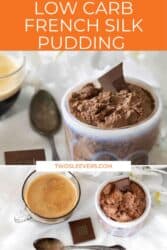 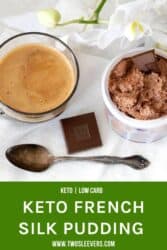 It sounds, looks, and tastes fancy but, this Keto French Silk Pie Pudding takes about ten minutes to prep and only ten minutes to cook. Did I mention it's healthy and allergy-friendly as well? You can't beat a dessert like this one.

Sometimes, you just want a dessert with a fancy name that's actually pretty easy to make. I love making myself sweet treats but, rarely do I like to go over the top in the effort department. This Keto French Silk Pudding is a perfect sweet treat that takes little effort to make.

What Makes This Keto Pudding So Great?

Why Is It Called French Silk Pie?

Have you ever had a French Silk Pie? That uttlerly delectable dessert served during the holidays? I wanted to replicate that without all the carbs. Really, all of the flavor of the pie is in the chocolate filling anyway, so I figured it would be easy enough to make.

There's nothing like a decadent dessert that's actually considered a healthy option. Keto French Silk Pudding is low carb, if you can believe it. No worries, you're not sacrificing one ounce of flavor for this treat to be healthy.

Now, this is a VERY RICH pudding. Don't sit down with a huge big bowl otherwise, you will be out of calories for the day in a jiffy. I would treat this more like a fat bomb.

It does have such a rich flavor, that you're not going to be able to eat that much of this Keto French Silk Pudding anyway. If you like chocolate then, then you're going to love this pudding. It's rich, and smooth, and will hit any chocolate craving you might be having.

Can I Make This Into A Keto French Silk Pie?

Yes! It's actually very easy. To do that, follow the directions to make the Keto French Silk Pie Pudding. Then make my Keto Pie Crust recipe. Fully bake the pie crust and let it cool. Then spread in this Keto French Silk Pudding. Cover and refrigerate until ready to serve.

What Is French Silk Pie Made Of?

Five ingredients, y'all. That's all you'll need to make this recipe. It's so good it's guaranteed to be on steady rotation in your house!

How Do You Make French Silk Pie Pudding?

For best results and for the longest-lasting leftovers, you will want to pop anything you don't eat right after you make it into the refrigerator. This helps keep the pudding thick and prevents bacteria and mold from forming.

How Long Does It Last?

This French Silk Pudding is an absolute delight and I was hard-pressed to let it sit in the fridge long enough to see how long it would stay good for.

If you have a little more self-control than I do, or don't have anyone to share this with, it retains its texture for 3-4 days. After that, it begins to separate slightly.

If you're attempting to eat healthy right now, don't deprive yourself. Whip up this Keto French Silk Pie Pudding and curb that crazy sweet tooth craving. I assure you, you'll love it just as much as I did. 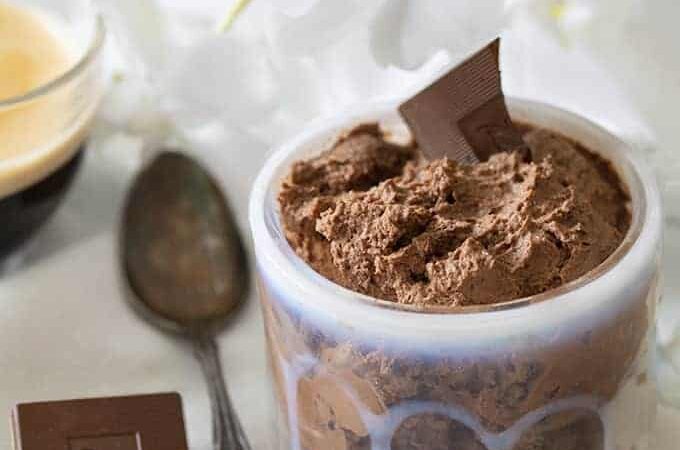