Using cashews or almonds to make this creamy also allows you make this dish dairy-free, which makes it a Kosher Safed Chicken korma as well.

Now I think I know the first question you're going to ask me--can you make this in the pressure cooker without using a slow cook function?

Well, many BURN messages later, I can tell you that it won't work well. What happens is that the nut paste is relatively thick.

Unless you want a watery korma (and trust me, you do not want a safed chicken korma that's watery), there's no way to make the chicken korma cook well under pressure. The sauce is just too thick.

On the other hand, as simple as it is to make this slow cooker chicken korma, it's really not that big a deal to use the slow cook function.

HOW TO USE THE SLOW COOK FUNCTION ON THE INSTANT POT

For those of you who are wondering about the slow cook function on the Instant Pot, just remember this:

Now keep in mind this makes a WHITE chicken korma which is very popular in North India. If you want a regular Chicken Korma, here is my very-well loved Indian Instant Pot Chicken Korma recipe that you must try.

Many will tell you they like it even more than they like my famous Butter Chicken recipe--while others consider that statement utter heresy.

I think you should make both recipes--as well as this white chicken korma recipe, and taste test them all yourself 🙂

So to make this Safed Korma recipe, you're going to basically blend aromatics, nuts, and spices in a blender to make a lovely, fragrant sauce.

You're going to pour that sauce over the chicken in the slow cooker, and then walk away--and come back to a fantastic dinner.

If you want a good side dish to this, I'd definitely try the Basmati Pilau recipe to soak up all the lovely sauce. For a vegetable side dish, one option is a hot vegetable like this Eggplant Bharta recipe

If you're looking for a cold salad, I'd try this Indian cabbage slaw recipe.

Find 74 more Indian Instant Pot recipes like this one that are tried and tested - and did I mention delicious?! Click here to go to the post so you can Pin it on Pinterest for later!

★ Did you make this recipe? Don't forget to give it a star rating below! Just click on the stars in the recipe card to rate. 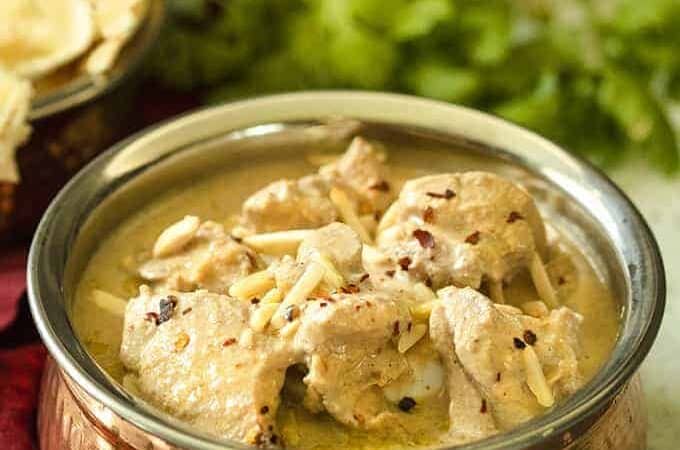