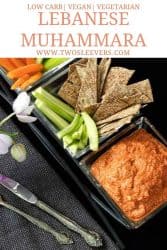 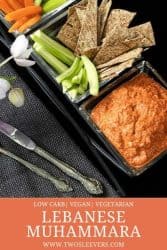 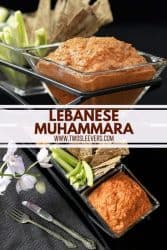 If it's one thing I could eat every day and never blink at the amount I've eaten, it's dip. I'm sure I can't be the only one that gets on a roll while eating dip and then realizes I've eaten the entire bowl. One of my favorite dips to make is this Lebanese Muhammara recipe. It's a delicious hot pepper dip that's bursting with flavor and, let me tell you, addicting as can be.

What Makes This Muhammara Recipe So Great?

Can you believe I made this in the air fryer? It's honestly crazy all the various types of recipes I can make with that thing. It turned out perfectly.

In fact, an air fryer is actually perfect for making this Muhammara recipe because it relies on roasted peppers for its base. An air fryer is an absolutely amazing, and relatively mess-free way to roast vegetables.

How Do You Say Muhammara?

If you're not familiar with this recipe, you might be just as perplexed about how to say it as you are about what is in it.

Since your guests will without a doubt ask what this delicious new dip is, do yourself a favor and learn how to say it correctly. It is loosely pronounced:

The 'U' in the word isn't pronounced. It begins with the "mmm" sound, just like the sound you'll be making when you try it.

I'm sure many of you are unfamiliar with the word muhammara since it's not a common food term in the United States. Muhammara simply means "reddened."

As you can see, the color of the Lebanese Muhammara is a reddish color, so this term makes sense with this recipe. Muhammara can also be spelled without the "u" and mean the same thing.

This word is commonly used for the popular red, hot pepper dip found in Syria, Turkey, and surrounding countries. In Turkey, this same dish is often referred to as "acuka."

Where Did Muhammara Originate?

So although I call it Lebanese in this recipe, at its broadest, it's a Levantine preparation.

It's just that it's not really easy to title a recipe "Lebanese, Syrian, Turkish and other surrounding countries Muhammara".

This dip, or sauce, has been popular for many years in the aforementioned countries and is used in many dishes.

How Do You Make Muhammara Dip?

What Do You Eat With Muhammara?

One thing I love about this Lebanese Muhammara is how versatile it is. There's no one "right way" to eat it and it's great whether you're living a low carb lifestyle or not. Here are a few serving ideas:

I mainly use it as a dip like you would a chip dip, however, just like salsa, it goes well with other dishes. It can be used for a wide variety of purposes which is why it's so popular in my house.

When I'm eating it as a snack while doing keto, I'm always sure to eat the vegetables with it instead of the pita chips since it makes it an even healthier choice.

You'll have to give this Lebanese Muhammara recipe a try. It takes less than thirty means to throw together and cook which makes it a pretty quick recipe. What's the most rewarding is that it's healthy without sacrificing all the flavor like many healthy recipes make you do.

If you love this Muhammara recipe as much as I do, make sure you share it with your friends on Facebook and Pinterest so they can try it too. 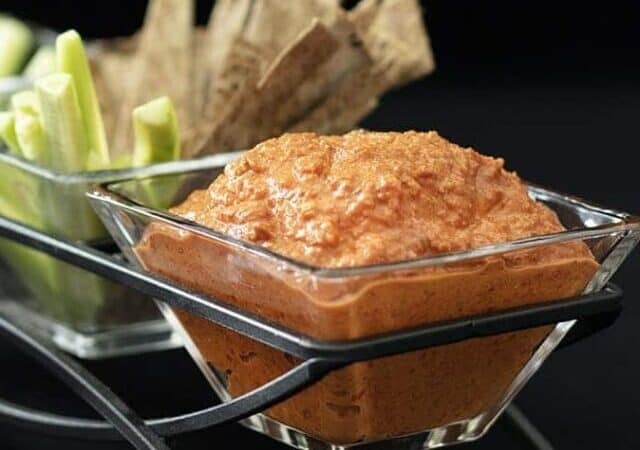 And don't forget to check out my air fryer cookbooks! Every day easy air fryer, and Air Fryer Revolution.