Five Ingredient Keto Flourless Chocolate Brownies are moist, delicious, and have 3 gms of carbs per serving. These taste just like the real thing!

If you don't want to rush out and try my Five Ingredient Keto Flourless Chocolate Brownies because they're not as pretty as some of the others you've seen, that's cool--but you're totally missing out. These are moist, light, and no one can tell they are baked with something other than sugar, and with no flour.

I did this the lazy way, using a microwave rather than a double-boiler because really, I've seen no differences in how the two work, especially if you're careful to not overcook the chocolate in the microwave. I also used my Vitamix to blend the living daylights out of the batter to get a lighter texture.

Okay, this is where I admit I was trying to make a cake, but really, it wanted to be a brownie. Who am I to argue with a dessert's desire to reach its full potential? Call it a cake, call it a brownie (it's really more like a brownie) it's absolutely delicious. It was so easy, I felt silly for not having tried it earlier.

I did make an AMAZING Keto Chocolate Cake that's nut-free, gluten-free and low-carb and is so very good. Here are some more delicious Low Carb Desserts.

EQUIPMENT YOU MAY NEED TO MAKE THESE KETO FLOURLESS CHOCOLATE BROWNIES:

? Did you make this recipe? Don't forget to give it a star rating below! Just click on the stars in the recipe card to rate. 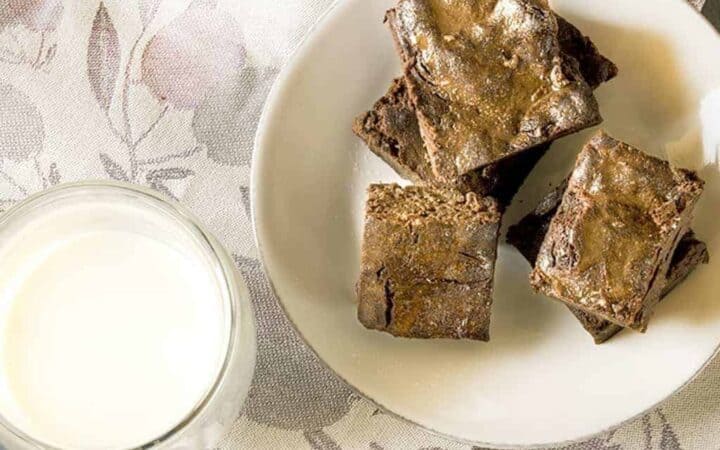 Don't forget to check out my Keto Desserts Cookbook!

Featuring recipes for many classic, high-carb favorites that have been reworked to be “fat bombs,” which help keep your macros in balance, as well as prevent you from craving all the things you usually can’t eat when you're trying to lose weight. Many of the more than 100 recipes require no more than 10 to 15 minutes of prep time, and they taste as delicious and indulgent as they sound—how about Chocolate Peanut Butter Pops, Mocha Cheesecake, or Almond Butter Bombs?